"Atlantic City government has been given over five years and two city administrations to deal with its structural budget issues and excessive spending," said Christie spokesman Kevin Roberts. "It has not. The governor is not going to ask the taxpayers to continue to be enablers in this waste and abuse."

Iowans and members of CAGE have visited with Governor Christie numerous times on his position on the expansion of gambling.  Let's use common sense when planning the development of any new casinos and thank you Governor Christie for keeping taxpayers money in their pockets.

To learn more about the situation, you can read the following articles:

Presidential hopeful Jeb Bush has always been outspoken as an opponent of gambling expansion. 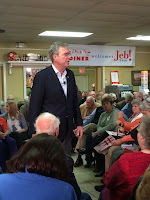 Bush has served on the board of No Casinos, a group that organized in the late 1990s to fight casinos in Florida and when he took office as governor of Florida, he said, "I am opposed to casino gambling in this state, and I am opposed whether it is on Indian property or otherwise," Bush told the Tampa Bay Times in 1999. Bush also threatened to sue to prevent gambling in the state."
CAGE caught up with Bush in South Carolina and asked what he thinks about gambling expansion. Ellen Marley Yates recently attended an Anderson County Town Hall with former Governor Bush at Dyar’s Diner in Pendleton, South Carolina on January 8, 2016. Ellen was able to ask Gov. Bush, if he was in favor of gambling and what if those dollars went to fixing the roads? Bush told us that he “hates gambling" even though he comes from a gambling state, and that he believes government should not use gambling money or rely on gaming revenue for government programs. He states that in government, there is always a problem in estimating the revenue from gambling and says that “In my opinion, it creates false hope."
Click on the video below to see Bush's complete answer.

While on the campaign trail in Iowa earlier this winter, Presidential candidate Governor Mike Huckabee was the guest speaker at the home of Mr. and Mrs. Robert Cramer (former candidate for U.S. Senate). With over 50 attendees Governor Huckabee shared his vision on where our country should be headed in the future.
After the Governor spoke, he visited with individuals and answered questions. Kim Schmett asked the Governor about his stand on gambling expansion on a national level.  The Governor said he feels gambling laws should be left to individual states - not a federal issue.  When pressed on the issue of the expansion of Indian gambling, he again stated that he felt it is a state issue and wouldn't act any further to change new legislation or executive orders that had been passed down from the current administration.
When CAGE researched the history of Governor Huckabee we found that he is a "fierce Anti-Gambling Proponent" (https://www.casino.org/news/mike-huckabee-enters-gop-2016-presidential-ring).
What do you have to say on this issue and Governor Huckabee's position? 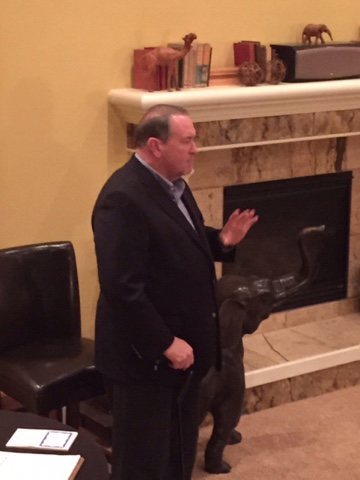 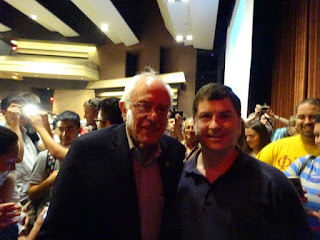 Bernie Sanders, one of the Democratic candidates for President, has visited Iowa many times over the past year and many of those times were to the city of Des Moines.

CAGE correspondent Paul Waddell had the opportunity to speak with him during one of Sanders events about his position on the expansion of gambling. Sanders said he had mixed feelings and needed to learn more about the issue.

Waddell specifically asked him if that answer also included his position on the changes on the regulations of off-reservation casinos for Indian tribal gambling.  Sanders again responded that he would really need to learn more before he was quoted on the issue.

In further researching Sanders voting history in Congress, we find that he did not support internet gambling and voted against it several times. We hope that this inclination continues with any further expansion of gambling.

Tell us what you think...
Posted by Unknown at 2:07 PM No comments:

Mayor Skip Conkling appreciates the benefits provided by Prairie Meadows. a non-profit casino in his town of Altoona. He is concerned about the expansion of casinos we're seeing nationwide and how that could harm organizations trying to give back to the communities they are a part of.
Click here to read his open letter to all current presidential candidates.

The Honorable Skip Conkling is currently Mayor of the City of Altoona. Prior to this, he served on the Altoona City Council for 16 years. He is currently a commissioner on the Des Moines Area Regional Transit Commission, as well as a member of the Metropolitan Planning Organization, Metropolitan Advisory Council, 2030 Transportation Task Force and the Convention and Visitors Bureau Board of Directors.

Posted by Unknown at 2:31 PM No comments: 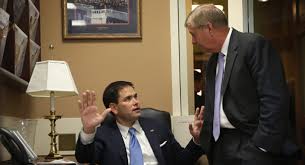 Two presidential hopefuls are working to fight online gambling in their current role as lawmakers.

Read more about the legislation here.
Posted by Unknown at 11:51 AM 4 comments: 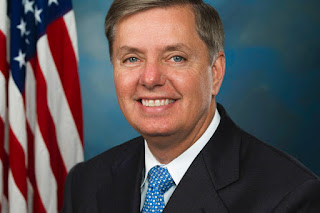 Citizens Against Gambling Expansion met with Senator Graham recently to discuss the expansion of Gambling. Graham said, "I'm not for any gambling in South Carolina period."  He said the issue was out of control across our nation and if elected president he would push to return to the terms with the Indian tribes as they were prior to Obama.  Graham says he also understands that there was little he could do at the present time except work to keep the issue to a minimum nationally.

Click the video below to learn more about his views.